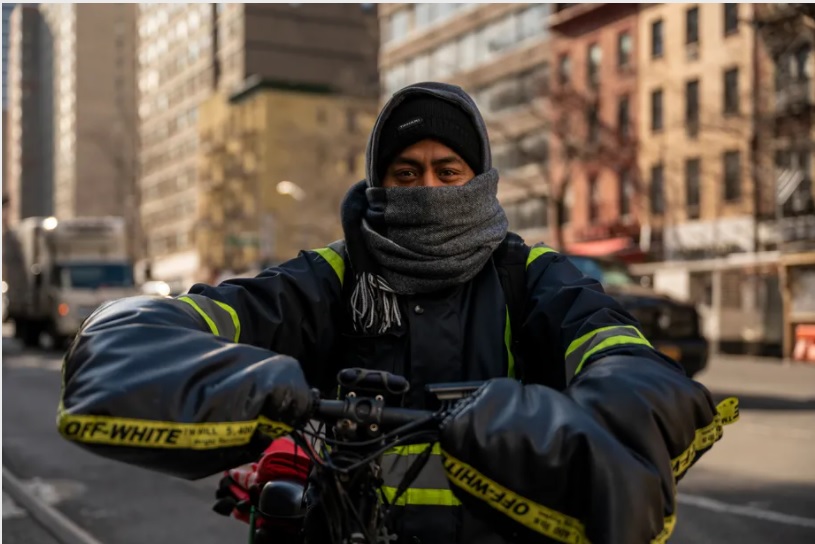 Gabriel Lopez, who has been making a living as a food delivery worker for over 18 months, braved the elements in Midtown, Jan. 21, 2022. Hiram Alejandro Durán/ THE CITY

The Deliveristas celebrated the new protections Sunday afternoon with a rally in Times Square, flanked by allies including Rep. Alexandria Ocasio-Cortez (D-The Bronx/Queens) and Sen. Chuck Schumer, who has advocated for federal funds to create rest stops for the workers and other supports.

The rally drew dozens of Deliveristas, many of whom hail from Indigenous communities from Mexico and Guatemala. Workers from Bangladesh and Mali also participated.

“We’re going to see big, big changes with these laws,” upper Manhattan delivery worker Manny Ramírez, 34, told THE CITY on Friday. “The discrepancy between what the client thinks we get paid and what the apps actually pay was immense — but now there is more awareness, and we felt like we’d won with that alone.”

“We feel like winners,” said Ernesta Galvez, 40, who works for the Relay app and is one of the few women among the Deliveristas. “It’s emotional to think about how far we’ve come.”

Ocasio-Cortez said in a phone interview on Sunday that the local gains for delivery workers send important signals nationally.

“What we’re seeing with the Deliveristas and the working class in New York, particularly tech workers, is such a strong counterpoint to what we’ve seen in California,” she said, noting that state’s ban on gig workers being recognized as full time employees.