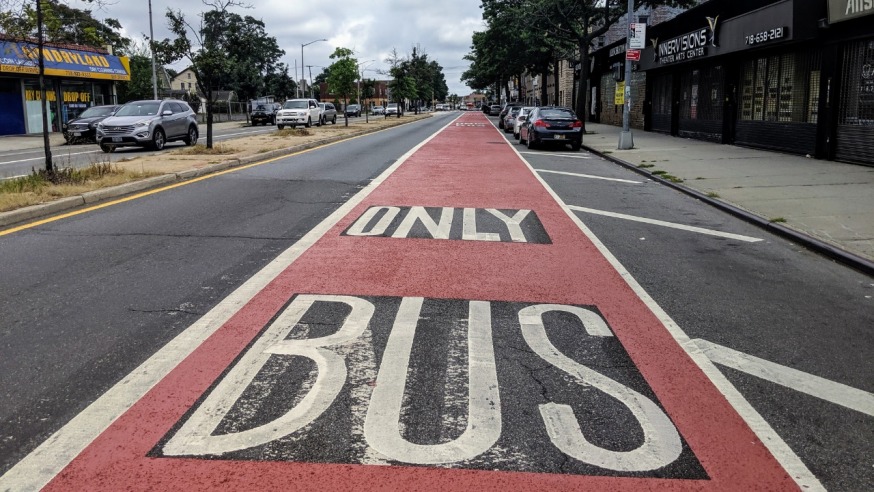 Vehicles that illegally encroach onto a bus lane along a section of Merrick Boulevard, pictured, will be hit with fines starting later this month (DOT)

Vehicles that illegally encroach onto a bus lane along a section of Merrick Boulevard in southeast Queens will be hit with fines starting later this month, the Dept. of Transportation announced Monday.

The DOT has installed cameras along a 6.4-mile bus lane along Merrick Boulevard, from Hillside Avenue in Jamaica to Springfield Boulevard in Laurelton. Only buses are permitted to use the lane and the DOT will begin issuing fines for violations on Nov. 22.

The automated bus lane cameras will be active from Mondays through Fridays from 6 a.m. to 7 p.m.

A single-vehicle violation will cost $50 with fines increasing to as much as $250 for a fifth offense. Violations are issued against vehicles, not drivers.

New signage indicating that the bus lane is camera-enforced has already been put in place, according to the DOT.

The DOT started issuing warning letters on Sep. 21 to motorists illegally using the bus lane. The warnings have been part of an effort to help drivers get ready for the change.

The bus lane between Hillside Avenue and Springfield Boulevard is part of Mayor de Blasio’s Better Buses initiative that aims to improve bus speeds in the city and increase ridership levels.

“Our message is clear – if you block a bus lane, not only are you slowing down the commutes of 94,000 bus riders, but you’ll be getting fined as well,” DOT Commissioner Hank Gutman said in a statement. “Be a good neighbor and stay out of the bus lanes!”

The Q4, Q5, Q84, Q85, N4 and N4X bus routes go through the Merrick Boulevard corridor. It will become the 30th corridor in the city to have automated camera enforcement.

A Queens lawmaker is hosting a candle-light vigil in Ozone Park Sunday for the two young police officers who were killed in Manhattan last week while responding to a domestic disturbance.

Several Queens precincts will be getting plainclothes teams as part of Mayor Eric Adams’ crackdown on illegal guns.

The number of people killed on New York City streets in 2021 was the highest it’s been since 2013, according to city data released by Transportation Alternatives.

A Far Rockaway man was sentenced today to nearly two decades in prison for attempting to kill his then-girlfriend in January 2019 while she lay in bed.

Queens Borough President Donovan Richards called for the establishment of a new office Thursday to centrally manage the city’s overall response to COVID-19.

The MTA has been sent more than $6 billion in COVID-19 relief funds from the federal government, U.S. Sen. Chuck Schumer announced Wednesday.